Software based skew correction can help resolve dimensional inaccuracies resulting from a printer assembly that is not perfectly square. Note that if your printer is significantly skewed it is strongly recommended to first use mechanical means to get your printer as square as possible prior to applying software based correction.

Make sure that no skew correction is applied during this print. You may do this by either removing the [skew_correction] module from printer.cfg or by issuing a SET_SKEW CLEAR=1 gcode. 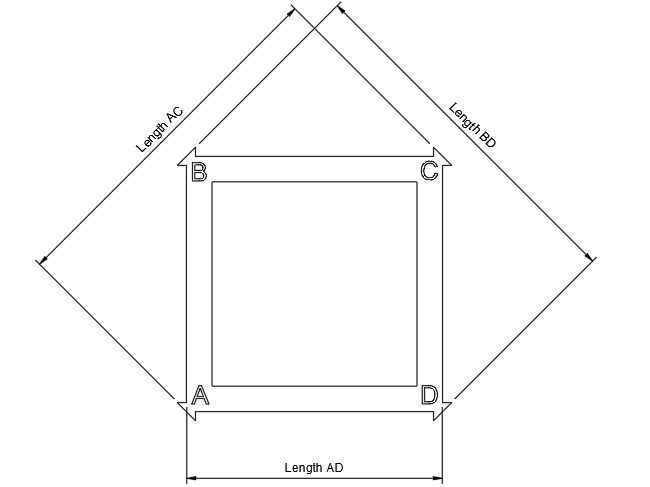 Make sure [skew_correction] is in printer.cfg. You may now use the SET_SKEW gcode to configure skew_correcton. For example, if your measured lengths along XY are as follows:

SET_SKEW can be used to configure skew correction for the XY plane.

You may also add measurements for XZ and YZ to the gcode:

The [skew_correction] module also supports profile management in a manner similar to [bed_mesh]. After setting skew using the SET_SKEW gcode, you may use the SKEW_PROFILE gcode to save it:

After this command you will be prompted to issue a SAVE_CONFIG gcode to save the profile to persistent storage. If no profile is named my_skew_profile then a new profile will be created. If the named profile exists it will be overwritten.

Once you have a saved profile, you may load it:

It is also possible to remove an old or out of date profile:

After removing a profile you will be prompted to issue a SAVE_CONFIG to make this change persist.

After skew_correction has been configured you may reprint the calibration part with correction enabled. Use the following gcode to check your skew on each plane. The results should be lower than those reported via GET_CURRENT_SKEW.

Due to the nature of skew correction it is recommended to configure skew in your start gcode, after homing and any kind of movement that travels near the edge of the print area such as a purge or nozzle wipe. You may use use the SET_SKEW or SKEW_PROFILE gcodes to accomplish this. It is also recommended to issue a SET_SKEW CLEAR=1 in your end gcode.

Keep in mind that it is possible for [skew_correction] to generate a correction that moves the tool beyond the printer's boundaries on the X and/or Y axes. It is recommended to arrange parts away from the edges when using [skew_correction].