Bed leveling (sometimes also referred to as "bed tramming") is critical to getting high quality prints. If a bed is not properly "leveled" it can lead to poor bed adhesion, "warping", and subtle problems throughout the print. This document serves as a guide to performing bed leveling in Klipper.

In order to get good quality prints the printer should be calibrated so that Z distances are accurate to within about 25 microns (.025mm). This is a small distance - significantly smaller than the width of a typical human hair. This scale can not be measured "by eye". Subtle effects (such as heat expansion) impact measurements at this scale. The secret to getting high accuracy is to use a repeatable process and to use a leveling method that leverages the high accuracy of the printer's own motion system.

Different types of printers use different methods for performing bed leveling. All of them ultimately depend on the "paper test" (described below). However, the actual process for a particular type of printer is described in other documents.

Prior to running any of these calibration tools, be sure to run the checks described in the config check document. It is necessary to verify basic printer motion before performing bed leveling.

The primary bed calibration mechanism is the "paper test". It involves placing a regular piece of "copy machine paper" between the printer's bed and nozzle, and then commanding the nozzle to different Z heights until one feels a small amount of friction when pushing the paper back and forth.

It is important to understand the "paper test" even if one has an "automatic Z probe". The probe itself often needs to be calibrated to get good results. That probe calibration is done using this "paper test".

In order to perform the paper test, cut a small rectangular piece of paper using a pair of scissors (eg, 5x3 cm). The paper generally has a thickness of around 100 microns (0.100mm). (The exact thickness of the paper isn't crucial.)

The first step of the paper test is to inspect the printer's nozzle and bed. Make sure there is no plastic (or other debris) on the nozzle or bed.

Inspect the nozzle and bed to ensure no plastic is present!

Always perform the paper test when both nozzle and bed are at room temperature!

It may seem odd to calibrate the distance at room temperature when the goal is to have a consistent distance when heated. However, if one calibrates when the nozzle is heated, it tends to impart small amounts of molten plastic on to the paper, which changes the amount of friction felt. That makes it harder to get a good calibration. Calibrating while the bed/nozzle is hot also greatly increases the risk of burning oneself. The amount of thermal expansion is stable, so it is easily accounted for later in the calibration process.

Use an automated tool to determine precise Z heights!

Klipper has several helper scripts available (eg, MANUAL_PROBE, Z_ENDSTOP_CALIBRATE, PROBE_CALIBRATE, DELTA_CALIBRATE). See the documents described above to choose one of them.

Place the paper between the nozzle and bed. It can be useful to fold a corner of the paper so that it is easier to grab. (Try not to push down on the bed when moving the paper back and forth.) 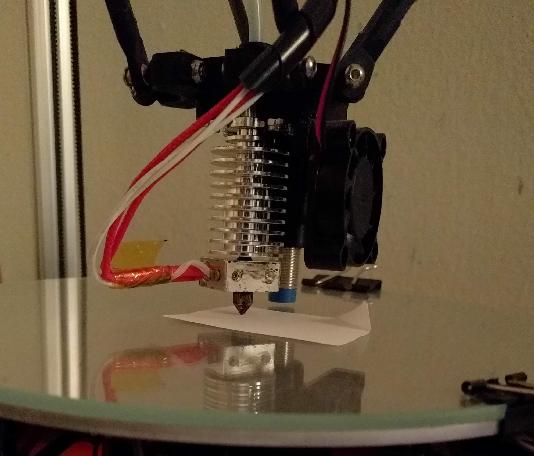 Use the TESTZ command to request the nozzle to move closer to the paper. For example:

If too much friction is found then one can use a positive Z value to move the nozzle up. It is also possible to use TESTZ Z=+ or TESTZ Z=- to "bisect" the last position - that is to move to a position half way between two positions. For example, if one received the following prompt from a TESTZ command:

After finding a small amount of friction run the ACCEPT command:

This will accept the given Z height and proceed with the given calibration tool.

If something goes wrong during the test, one can use the ABORT command to exit the calibration tool.

After successfully performing bed leveling, one may go on to calculate a more precise value for the combined impact of "thermal expansion", "thickness of the paper", and "amount of friction felt during the paper test".

This type of calculation is generally not needed as most users find the simple "paper test" provides good results.

The easiest way to make this calculation is to print a test object that has straight walls on all sides. The large hollow square found in docs/prints/square.stl can be used for this. When slicing the object, make sure the slicer uses the same layer height and extrusion widths for the first level that it does for all subsequent layers. Use a coarse layer height (the layer height should be around 75% of the nozzle diameter) and do not use a brim or raft.

Print the test object, wait for it to cool, and remove it from the bed. Inspect the lowest layer of the object. (It may also be useful to run a finger or nail along the bottom edge.) If one finds the bottom layer bulges out slightly along all sides of the object then it indicates the nozzle was slightly closer to the bed then it should be. One can issue a SET_GCODE_OFFSET Z=+.010 command to increase the height. In subsequent prints one can inspect for this behavior and make further adjustment as needed. Adjustments of this type are typically in 10s of microns (.010mm).

The easiest way to apply the desired Z adjustment is to create a START_PRINT g-code macro, arrange for the slicer to call that macro during the start of each print, and add a SET_GCODE_OFFSET command to that macro. See the slicers document for further details.