Klipper has built-in support for ADXL345 accelerometer, which can be used to measure resonance frequencies of the printer for different axes, and auto-tune input shapers to compensate for resonances. Note that using ADXL345 requires some soldering and crimping. ADXL345 can be connected to a Raspberry Pi directly, or to an SPI interface of an MCU board (it needs to be reasonably fast).

When sourcing ADXL345, be aware that there is a variety of different PCB board designs and different clones of them. Make sure that the board supports SPI mode (small number of boards appear to be hard-configured for I2C by pulling SDO to GND), and, if it is going to be connected to a 5V printer MCU, that it has a voltage regulator and a level shifter.

You need to connect ADXL345 to your Raspberry Pi via SPI. Note that the I2C connection, which is suggested by ADXL345 documentation, has too low throughput and will not work. The recommended connection scheme:

Fritzing wiring diagrams for some of the ADXL345 boards:

Double-check your wiring before powering up the Raspberry Pi to prevent damaging it or the accelerometer.

The accelerometer must be attached to the toolhead. One needs to design a proper mount that fits their own 3D printer. It is better to align the axes of the accelerometer with the printer's axes (but if it makes it more convenient, axes can be swapped - i.e. no need to align X axis with X and so forth - it should be fine even if Z axis of accelerometer is X axis of the printer, etc.).

An example of mounting ADXL345 on the SmartEffector: 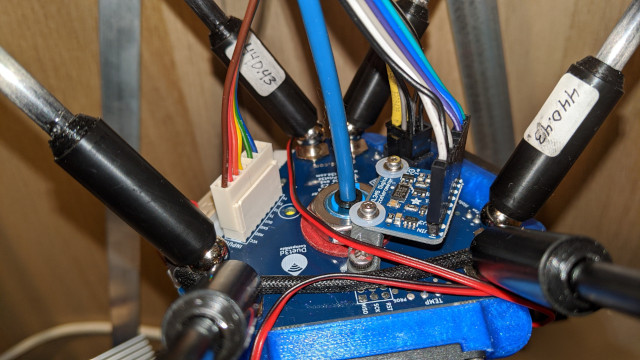 Note that on a bed slinger printer one must design 2 mounts: one for the toolhead and one for the bed, and run the measurements twice. See the corresponding section for more details.

Note that resonance measurements and shaper auto-calibration require additional software dependencies not installed by default. First, you will have to run on your Raspberry Pi the following command:

to install numpy package. Note that, depending on the performance of the CPU, it may take a lot of time, up to 10-20 minutes. Be patient and wait for the completion of the installation. On some occasions, if the board has too little RAM, the installation may fail and you will need to enable swap.

Next, run the following commands to install the additional dependencies:

Afterwards, check and follow the instructions in the RPi Microcontroller document to setup the "linux mcu" on the Raspberry Pi.

Make sure the Linux SPI driver is enabled by running sudo raspi-config and enabling SPI under the "Interfacing options" menu.

Add the following to the printer.cfg file:

It is advised to start with 1 probe point, in the middle of the print bed, slightly above it.

Restart Klipper via the RESTART command.

Now you can test a connection.

You should see the current measurements from the accelerometer, including the free-fall acceleration, e.g.

If you get an error like Invalid adxl345 id (got xx vs e5), where xx is some other ID, it is indicative of the connection problem with ADXL345, or the faulty sensor. Double-check the power, the wiring (that it matches the schematics, no wire is broken or loose, etc.), and soldering quality.

Next, try running MEASURE_AXES_NOISE in Octoprint, you should get some baseline numbers for the noise of accelerometer on the axes (should be somewhere in the range of ~1-100). Too high axes noise (e.g. 1000 and more) can be indicative of the sensor issues, problems with its power, or too noisy imbalanced fans on a 3D printer.

Now you can run some real-life tests. Run the following command:

Note that it will create vibrations on X axis. It will also disable input shaping if it was enabled previously, as it is not valid to run the resonance testing with the input shaper enabled.

Attention! Be sure to observe the printer for the first time, to make sure the vibrations do not become too violent (M112 command can be used to abort the test in case of emergency; hopefully it will not come to this though). If the vibrations do get too strong, you can attempt to specify a lower than the default value for accel_per_hz parameter in [resonance_tester] section, e.g.

If it works for X axis, run for Y axis as well:

This will generate 2 CSV files (/tmp/resonances_x_*.csv and /tmp/resonances_y_*.csv). These files can be processed with the stand-alone script on a Raspberry Pi. To do that, run running the following commands: 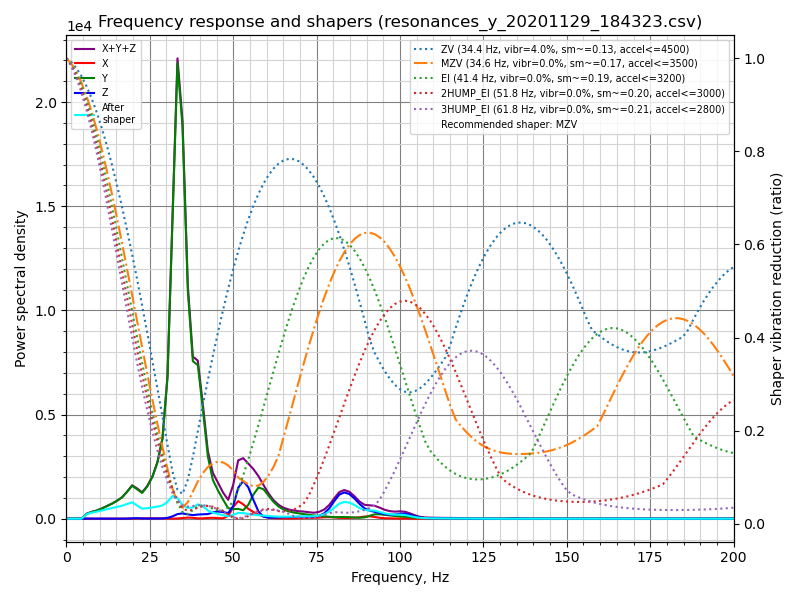 The suggested configuration can be added to [input_shaper] section of printer.cfg, e.g.:

or you can choose some other configuration yourself based on the generated charts: peaks in the power spectral density on the charts correspond to the resonance frequencies of the printer.

However, you can also connect two accelerometers simultaneously, though they must be connected to different boards (say, to an RPi and printer MCU board), or to two different physical SPI interfaces on the same board (rarely available). Then they can be configured in the following manner:

Let's consider the following results from the automatic tuning: 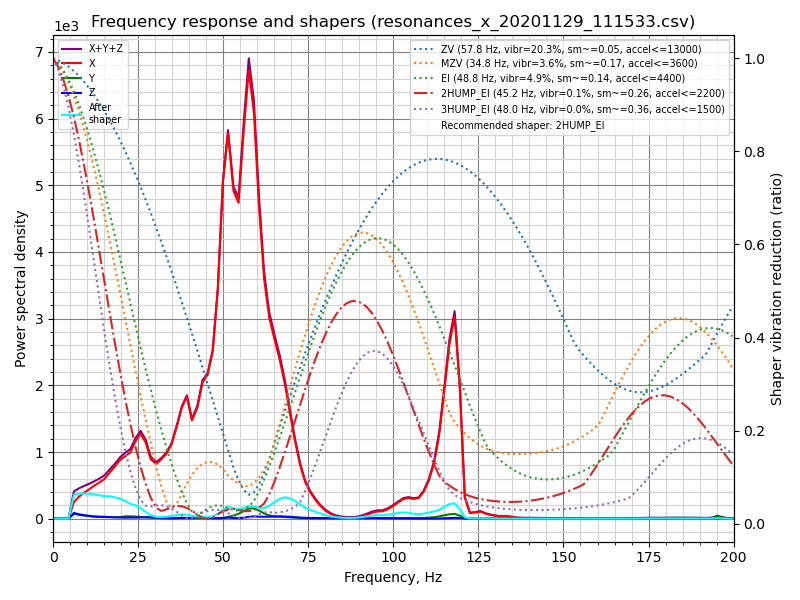 Note that the reported smoothing values are some abstract projected values. These values can be used to compare different configurations: the higher the value, the more smoothing a shaper will create. However, these smoothing scores do not represent any real measure of smoothing, because the actual smoothing depends on max_accel and square_corner_velocity parameters. Therefore, you should print some test prints to see how much smoothing exactly a chosen configuration creates.

In the example above the suggested shaper parameters are not bad, but what if you want to get less smoothing on the X axis? You can try to limit the maximum shaper smoothing using the following command:

which limits the smoothing to 0.2 score. Now you can get the following result: 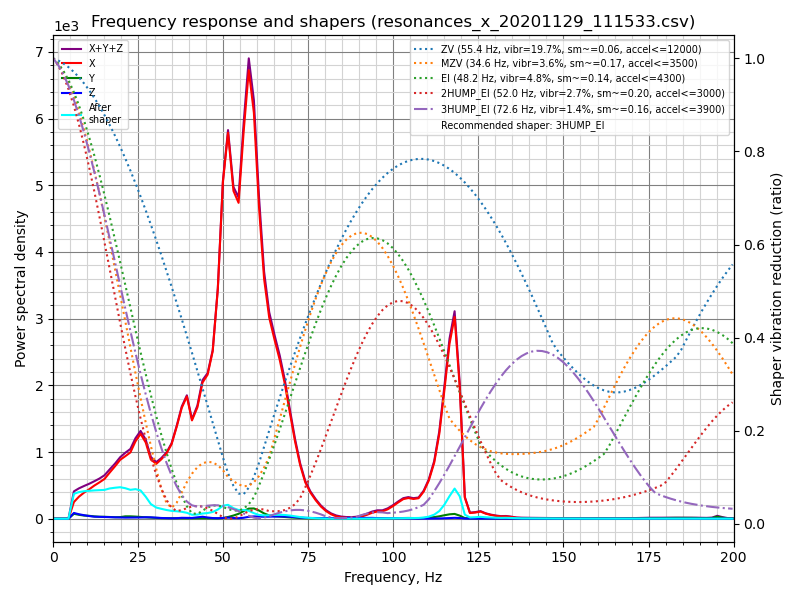 If you compare to the previously suggested parameters, the vibrations are a bit larger, but the smoothing is significantly smaller than previously, allowing larger maximum acceleration.

When deciding which max_smoothing parameter to choose, you can use a trial-and-error approach. Try a few different values and see which results you get. Note that the actual smoothing produced by the input shaper depends, primarily, on the lowest resonance frequency of the printer: the higher the frequency of the lowest resonance - the smaller the smoothing. Therefore, if you request the script to find a configuration of the input shaper with the unrealistically small smoothing, it will be at the expense of increased ringing at the lowest resonance frequencies (which are, typically, also more prominently visible in prints). So, always double-check the projected remaining vibrations reported by the script and make sure they are not too high.

Note that if you chose a good max_smoothing value for both of your axes, you can store it in the printer.cfg as

Then, if you rerun the input shaper auto-tuning using SHAPER_CALIBRATE Klipper command in the future, it will use the stored max_smoothing value as a reference.

Since the input shaper can create some smoothing in parts, especially at high accelerations, you will still need to choose the max_accel value that does not create too much smoothing in the printed parts. A calibration script provides an estimate for max_accel parameter that should not create too much smoothing. Note that the max_accel as displayed by the calibration script is only a theoretical maximum at which the respective shaper is still able to work without producing too much smoothing. It is by no means a recommendation to set this acceleration for printing. The maximum acceleration your printer is able to sustain depends on its mechanical properties and the maximum torque of the used stepper motors. Therefore, it is suggested to set max_accel in [printer] section that does not exceed the estimated values for X and Y axes, likely with some conservative safety margin.

Alternatively, follow this part of the input shaper tuning guide and print the test model to choose max_accel parameter experimentally.

The same notice applies to the input shaper auto-calibration with SHAPER_CALIBRATE command: it is still necessary to choose the right max_accel value after the auto-calibration, and the suggested acceleration limits will not be applied automatically.

If you are doing a shaper re-calibration and the reported smoothing for the suggested shaper configuration is almost the same as what you got during the previous calibration, this step can be skipped.

TEST_RESONANCES command supports custom axes. While this is not really useful for input shaper calibration, it can be used to study printer resonances in-depth and to check, for example, belt tension.

To check the belt tension on CoreXY printers, execute

and use graph_accelerometer.py to process the generated files, e.g.

which will generate /tmp/resonances.png comparing the resonances.

and then use the same command

to generate /tmp/resonances.png comparing the resonances.

This will run the full test for both axes and generate the csv output (/tmp/calibration_data_*.csv by default) for the frequency response and the suggested input shapers. You will also get the suggested frequencies for each input shaper, as well as which input shaper is recommended for your setup, on Octoprint console. For example:

If you agree with the suggested parameters, you can execute SAVE_CONFIG now to save them and restart the Klipper. Note that this will not update max_accel value in [printer] section. You should update it manually following the considerations in Selecting max_accel section.

If your printer is a bed slinger printer, you can specify which axis to test, so that you can change the accelerometer mounting point between the tests (by default the test is performed for both axes):

You can execute SAVE_CONFIG twice - after calibrating each axis.

However, if you connected two accelerometers simultaneously, you simply run SHAPER_CALIBRATE without specifying an axis to calibrate the input shaper for both axes in one go.

Warning! It is not advisable to run the shaper autocalibration very frequently (e.g. before every print, or every day). In order to determine resonance frequencies, autocalibration creates intensive vibrations on each of the axes. Generally, 3D printers are not designed to withstand a prolonged exposure to vibrations near the resonance frequencies. Doing so may increase wear of the printer components and reduce their lifespan. There is also an increased risk of some parts unscrewing or becoming loose. Always check that all parts of the printer (including the ones that may normally not move) are securely fixed in place after each auto-tuning.

Also, due to some noise in measurements, it is possible that the tuning results will be slightly different from one calibration run to another one. Still, it is not expected that the noise will affect the print quality too much. However, it is still advised to double-check the suggested parameters, and print some test prints before using them to confirm they are good.

Offline processing of the accelerometer data¶

It is possible to generate the raw accelerometer data and process it offline (e.g. on a host machine), for example to find resonances. In order to do so, run the following commands via Octoprint terminal:

ignoring any errors for SET_INPUT_SHAPER command. For TEST_RESONANCES command, specify the desired test axis. The raw data will be written into /tmp directory on the RPi.

The raw data can also be obtained by running the command ACCELEROMETER_MEASURE command twice during some normal printer activity - first to start the measurements, and then to stop them and write the output file. Refer to G-Codes for more details.

will plot the comparison of several /tmp/raw_data_x_*.csv files for Z axis to /tmp/resonances_x.png file.

The shaper_calibrate.py script accepts 1 or several inputs and can run automatic tuning of the input shaper and suggest the best parameters that work well for all provided inputs. It prints the suggested parameters to the console, and can additionally generate the chart if -o output.png parameter is provided, or the CSV file if -c output.csv parameter is specified.

Providing several inputs to shaper_calibrate.py script can be useful if running some advanced tuning of the input shapers, for example: